Having got some of the disappointment of last weekend’s defeat to Man United out of our system in midweek, we can complete our recovery process at Southampton on Sunday.

We head to St Mary’s Stadium with a point to prove, determined to take the opportunity to show a more clinical edge against opponents who have caused us trouble down the years. Memories abound of Fraser Forster delivering displays reminiscent of David de Gea, of Shane Long snapping at the heels of our backline and of leaving the south coast empty handed.

That all changed last season as we won 5-0 in the Emirates FA Cup, and then  2-0 in the Premier League a few months later. We are favourites to continue that run, although the Saints have shown signs of improvement in recent weeks, thrashing Everton, running Man City close and then drawing at Bournemouth.

Read on for a comprehensive pre-match briefing: we’ve got classic goals against Southampton, team news, an exclusive chat with Arsene Wenger, match facts, graphics and a chance to have your say. 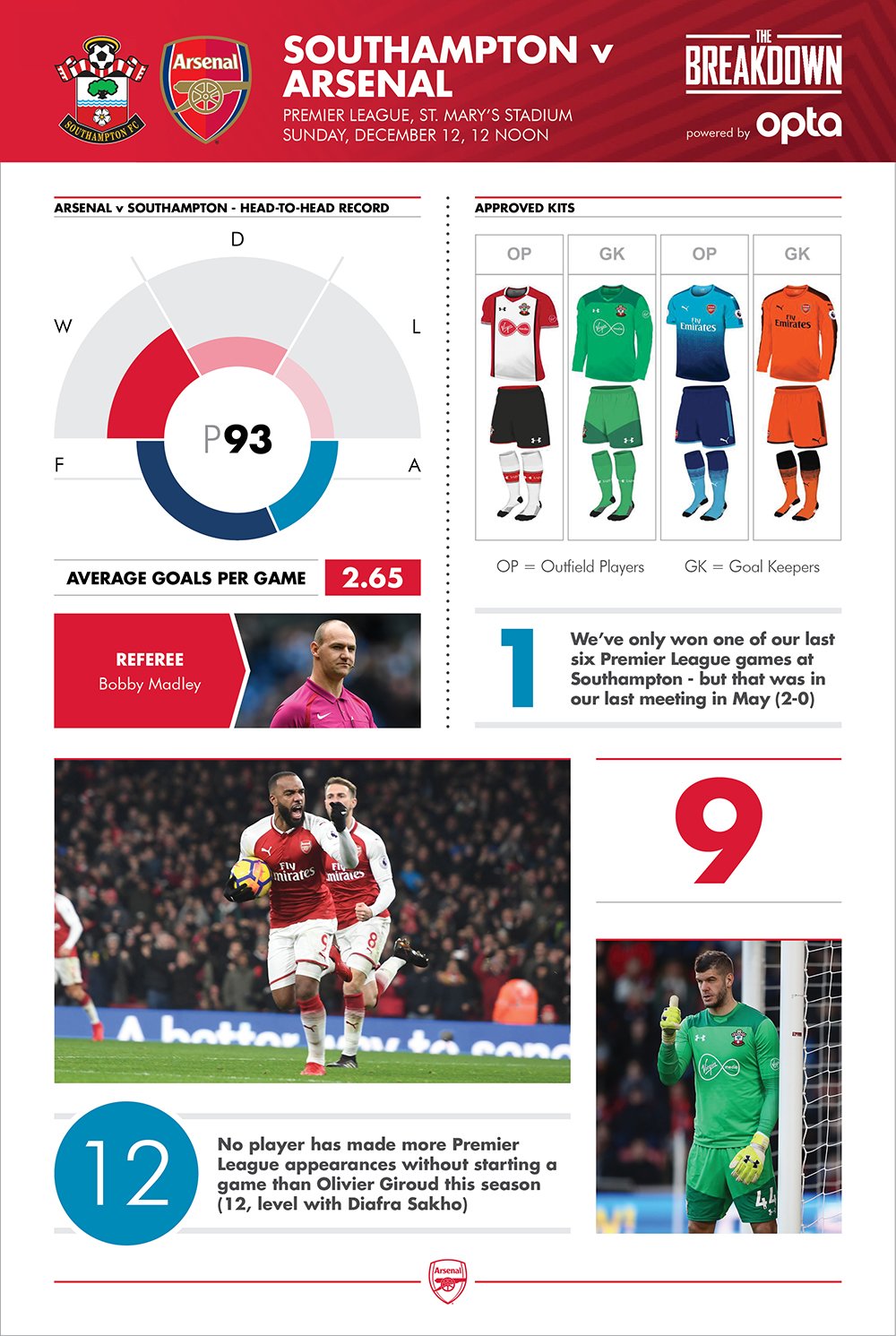 THE CASE FOR THE DEFENCE

Wenger on switching to four at the back against BATE Borisov…

“There was not a lot at stake on the competition side, so we could play with a bit more freedom offensively. That formation will certainly come back at some stage. It was also to make the team flexible because, even against Manchester United, we moved to a four at the back. We’ll switch more, of course. It always depends on the nature of the games. At the moment we’re playing with three at the back but all these players have to be adaptable to any kind of system.”

“Dusan Tadic can drift in and out of matches, but when on form he’s often superb, bamboozling opponents with his dribbling, feinting to go inside then going down the outside before crossing. He’s often been fielded in a No 10 role this season, where his through balls are more obvious.”

Happy to be back on the pitch with a great team effort & back on the scoresheet ! 6-0 #COYG #europaleague #AFCvBATE https://t.co/N3fecel2sT

“It’s down to the attitude of the players, the team mentality and I must say the united spirit the players have shown. Their focus makes it an absolute pleasure to work with them on a daily basis. That’s the quality that will be needed until the end of the season because we play in the Premier League where you have to be focused in every single game. That kind of attitude will be very important in helping us come from behind to be able to win games.”