Player of the season

Player of the Season: In second place...

In second place is Nacho Monreal. The Spain international was outstanding at the back once again and was just edged out into second place with 36 per cent of the votes cast.

Rob Kelly gives his verdict on the 32-year-old.

When, at the turn of the year, Arsene Wenger hailed Nacho Monreal as a "silent leader", you somehow understood exactly what he meant.

The Spain international may not be cut from the same cloth as the likes of Mr Arsenal, Tony Adams, but his influence on this team remains unmistakeable.

Monreal is a quiet, unassuming character - albeit one very popular with the squad off the pitch and one with a very handy knack for delivering on it when it matters most.

That was certainly the case this season, when he scored six times - his best return for the club - and on each occasion, his strike was our first goal of the game.

Particularly memorable was his performance against Crystal Palace when, just back from a month out, he scored one and assisted two in just 13 minutes. It was not long before the fans christened him La Cabra, solidifying his place in their affections.

Then there was his part in our equaliser in the second leg of our Carabao Cup semi-final against Chelsea when, having gone a goal down, Monreal's header deflected off two players and in. The goal may not have been his officially, but the fans knew how important La Cabra had been again.

But it was not just up front where he made a big impact. It says a lot for Nacho's performance level that in a season where we struggled defensively, he remained one of our best players.

His brilliant goal-line clearance to deny Jay Rodriguez in our victory against West Brom back in September will live long in the memory, but less noteworthy was the way he seamlessly slotted into our back three and didn't put a foot wrong.

Nacho Monreal may never gain the column inches that the likes of Mesut Ozil or Pierre-Emerick Aubameyang regularly do, but our silent leader keeps making a big noise on the pitch and that's why Mr Consistency is second in our Player of the Season vote. 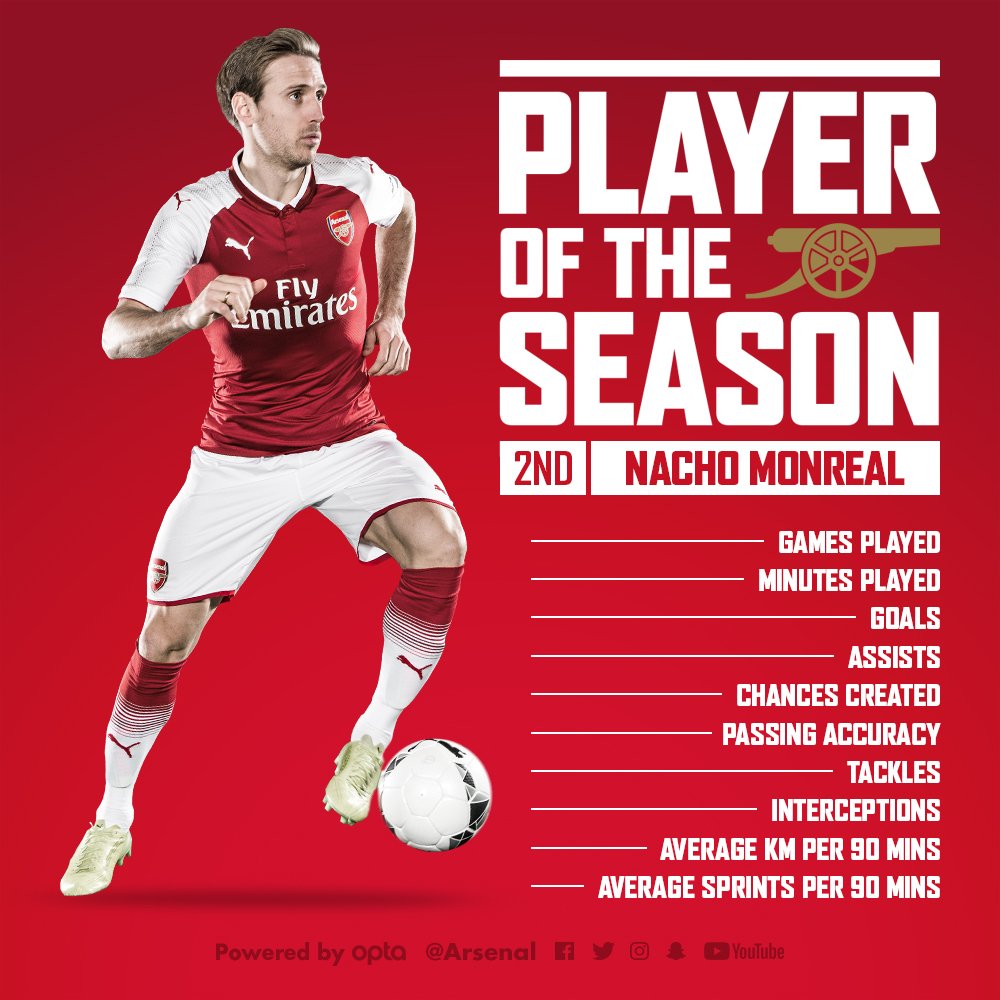 “He’s doing really well this year. It’s a bit of a change in position for him, but I think it suits him a lot and now that he’s got all the experience he’s got, he’s started scoring goals. He’s just a very cool guy, not like the normal footballer that people think of. A very good professional who takes care of himself a lot and it shows on the pitch."Hector Bellerin, October 2017

“He is absolutely vital for us because he can play centre back in the three, he can play full-back in the four. It gives me many options to choose the tactics of the way we play, before the game. He is confident, he has good timing and he is an intelligent player and a very professional player."Arsene Wenger, January 2018

On his first game back after a month out injured, Nacho made an instant impact, scoring one and claiming two assists as we eased to victory against Crystal Palace. The Spain international was at the heart of everything in a blistering opening to the game, heading in from close range after just six minutes and then creating the goals for Alex Iwobi and Laurent Koscielny.

Our away form during 2017/18 was clearly a major issue, and had it not been for a timely intervention from Monreal at Everton we might not have picked up one of our only wins on the road in the Premier League. Trailing 1-0 to Everton at Goodison Park, the Spain international reacted quickest to a loose ball to fire in an equaliser just before the interval. That goal gave was the confidence to take control after the interval, running out comfortable winners.