Player of the season

Player of the Season: Aaron Ramsey

Our winner is Aaron Ramsey. The Wales international was in inspired form for much of the campaign and deservedly claims the award for the second time in his Arsenal career.

Rob Kelly gives his verdict on the 27-year-old.

There were three moments in Aaron Ramsey's season that highlight just how important he has become to this Arsenal team - and point to a player once again at the peak of his powers.

The first came in February when he scored his first hat-trick for us, a well-taken treble as we eased past Everton at Emirates Stadium. Here we were seeing a player with a sense of timing and composure in front of goal that is rare in a midfielder.

The second moment came just a few months later, and only served to confirm the impression that he has become one of Europe's premier midfielders, as he soared in the box against CSKA Moscow, flicked out a leg and acrobatically volleyed the ball up and over the goalkeeper and into the net.

It was a goal that brought Emirates Stadium to its feet, and was yet another memorable moment for the Wales international's already bulging highlights reel.

The third however, probably meant more to him than the previous two. It came in Arsene Wenger's last match in charge, when - in what felt like a symbolic move - the manager handed the captain's armband to a player he had brought to the club as a 17-year-old.

For while the dominant narratives this term have surrounded our struggles on the road and the boss' departure, it should not mask the fact that Ramsey has been personally outstanding for much of a difficult campaign collectively.

Indeed, when you think of Ramsey at his very best you might naturally land on 2013/14 when he was involved in 18 Premier League goals and was hailed as one of the most exciting talents in Europe.

But it says much for how he has performed in 2017/18 that despite the team's form and some injury absences, he has only been involved in three goals less than that stellar season. And it underlines his status that his contribution this term has seen him take his place in our list of top-10 goalscorers under Wenger.

It has been another fine campaign for Ramsey, and with his best years ahead of him it is an exciting thought that he should only get even better. 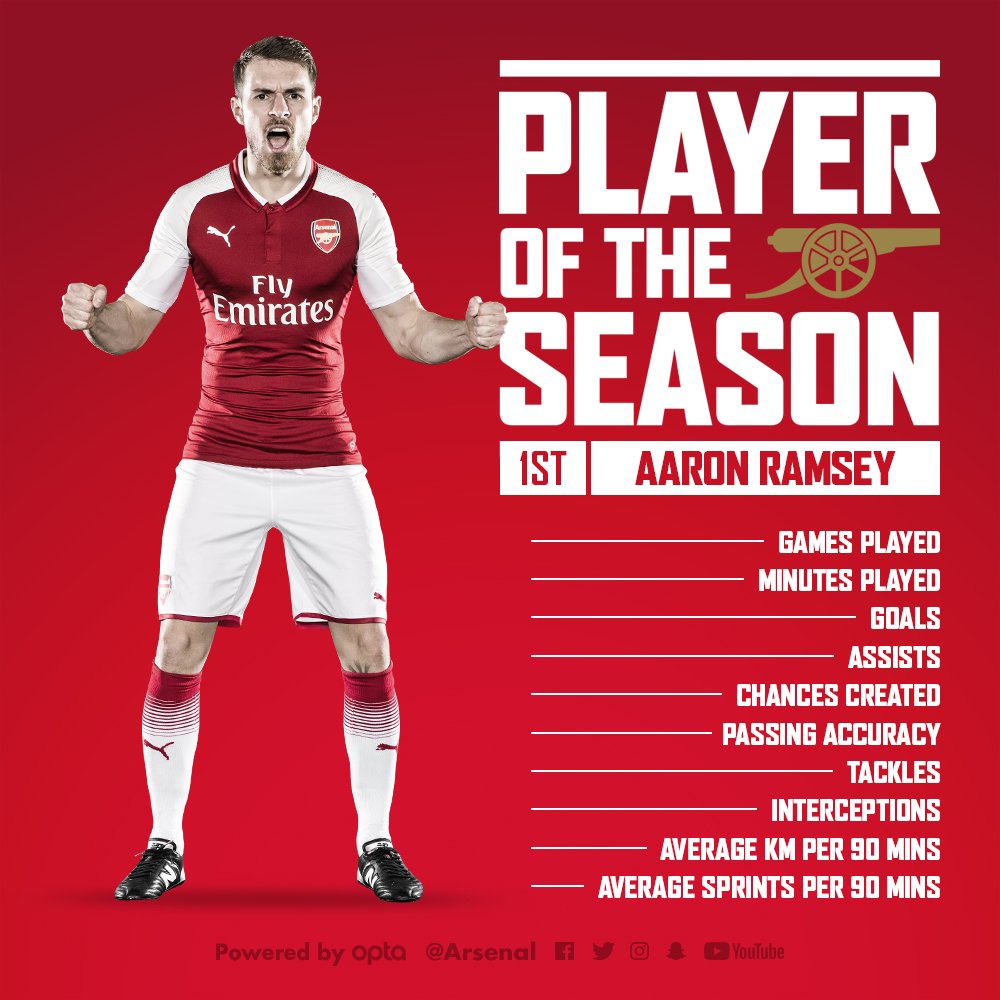 “He makes a huge physical contribution to our play, which everyone knows he’s capable of. When Aaron’s fit, he’s magnificent. He’s been efficient lately and is really coming back to his best."Per Mertesacker, December 2017

This was Ramsey at his attacking best, as he scored his first hat-trick for the club as we blew Everton away at Emirates Stadium. Coming just days after Henrikh Mkhitaryan and Pierre-Emerick Aubameyang had joined the club, the Wales international stole the show with three well-taken strikes as we eased to a comfortable victory.

Ramsey scored twice in this game, and while his first was a well-taken in itself, it was nothing compared to his second. With 27 minutes gone in this Europa League quarter-final first leg, Mesut Ozil chipped the ball over the top of the CSKA defence for Ramsey to run on to. Without breaking stride, the midfielder jumped, flicked out a leg and sent a sensational volley looping up and over Igor Akinfeev and into the net.