It’s the problem that has vexed Arsene Wenger all season. How do we translate our home form into away performances?

Five straight games at the Emirates brought us five straight wins. And to be fair our away form in Europe has been solid. But the standout stat ahead of Sunday’s trip to Newcastle is that we’ve earned just 24 per cent of our Premier League points in away games this season - the lowest share in the division.

Putting that right on the back of a very late Thursday night in Moscow is the challenge facing Wenger and the players. But if you like your omens then perhaps this one will appeal: the last time we lost four in a row on our top-flight travels was in 1984 - and we ended that streak with a win at St. James’ Park.

Pierre-Emerick Aubameyang will return to our squad and Mohamed Elneny is available after his red card against Southampton was overturned. But Granit Xhaka will need to recover from illness to reclaim his midfield place in the North-East.

You’re in the right place for a comprehensive pre-match briefing. Watch some classic goals, hear from the boss, get the latest team news and have your say. 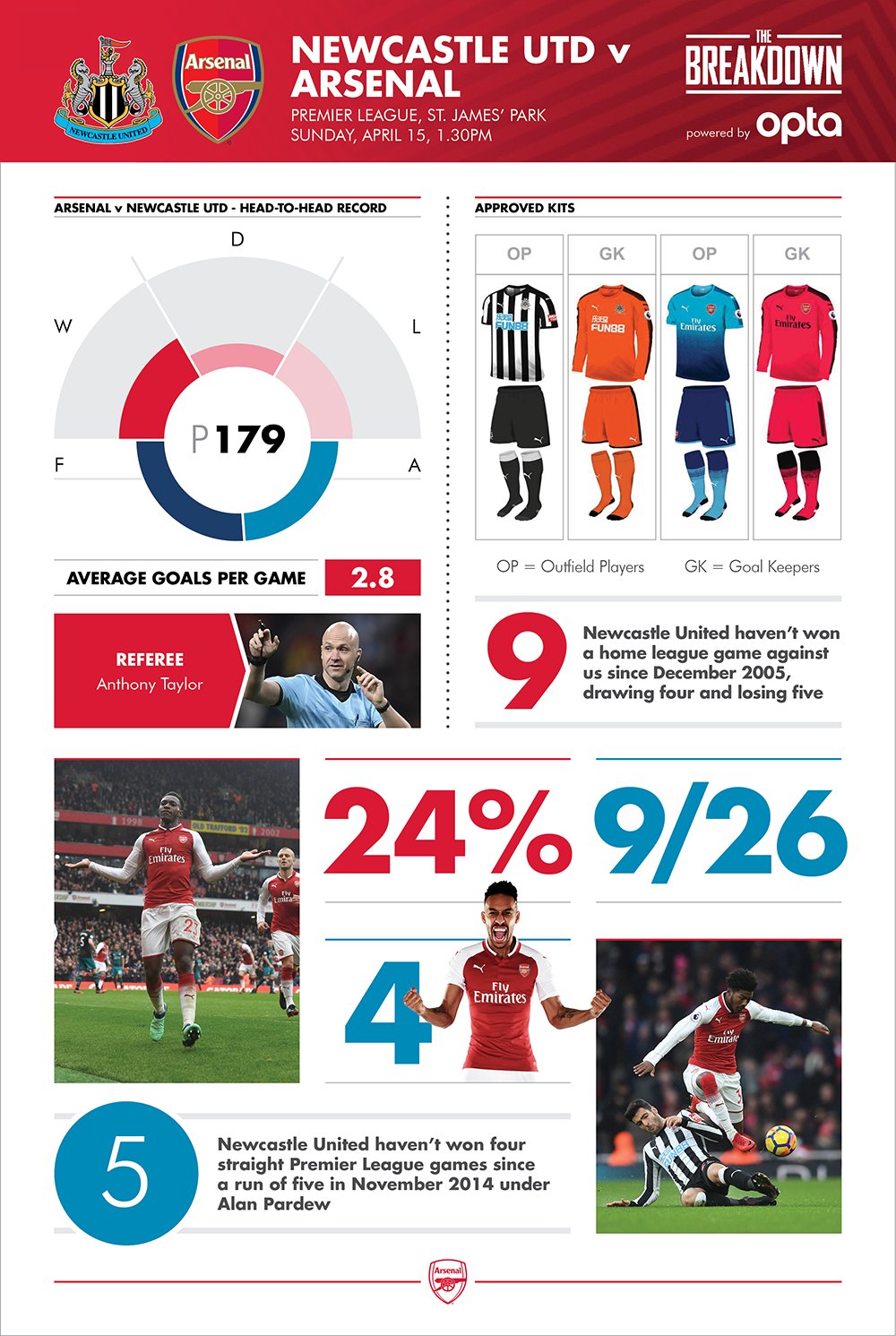 ONE TO WATCH… AUBAMEYANG

Auba has scored in each of his last four Premier League games and will be fully rested after sitting out another Europa League game.

We’ve seen a variety of finishes from our record signing, culminating in a brave toe-poke as Southampton’s goalkeeper came out to challenge for Danny Welbeck’s flick against Southampton.

“He’s worked hard,” said the boss. “I feel he was not completely ready physically when he joined us but he worked very hard in training.

“He worked a lot technically as well, and has improved his touch. He’s quick now, sharp, intelligent and I think he enjoys being part of the group. You feel that when he plays and that’s why he’s very interesting.

“Also we need some fresh players over the weekend, so he always sure to play!”

“Newcastle’s defensive organisation remains very good, as you’d expect from a Rafa Benitez side, with the full backs tucking inside and the midfield quartet protecting them effectively. Centre back Jamaal Lascelles has probably been Newcastle’s star performer.

“However, Newcastle are sometimes guilty of sitting too deep for too long, inviting waves of constant pressure. Arsenal will have spells when they’re clearly on top, and need to convert possession dominance into clear-cut chances.”

THE FINAL WORD… ON OUR AWAY FORM

“There are certainly a few factors but there’s no real rationality in there,” said the boss.

“After we have lost one or two, the confidence drops a little bit. We were sometimes unlucky and sometimes maybe defensively we weren’t stable enough. It would be good for us to finish strong away from home now in the Premier League.”