Tuesday night's events in Rome delivered the perfect warning to us.

Ever since the final whistle blew at the end of our 4-1 first leg win over CSKA Moscow last week, there has been a sense that we already have one foot in the semi-final of the Europa League.

However, Barcelona were eliminated from the Champions League from exactly that position of strength against Roma earlier this week, and Real Madrid also had difficulty converting a three-goal first leg lead into qualification the following night against Juventus.

So those two, high-profile examples should help us avoid complacency in Moscow.

Our away record against Russian sides over the years also underlines that there is plenty of work yet to be done for our name to be included in Friday's draw – we have drawn one and lost three of our previous four trips to the Russian capital.

But confidence is high for this trip. Arsène Wenger's team are the top-scoring side in the Europa League so far this season with 27 goals, and have won eight games in the competition - more than any other side.

History is also on our side – we have qualified 15 times out of 17 when protecting a first-leg lead in European knockout football.

This competition has slowly but surely grown into our priority this season, and the manager will revert to his strongest side after resting several players at the weekend against Southampton.

Aaron Ramsey and Laurent Koscielny return to the squad, but Granit Xhaka misses out with flu.

We preview the quarter-final second leg with classic goals, team news, quotes from the pre-match press conference, facts, graphics and a chance to have your say. 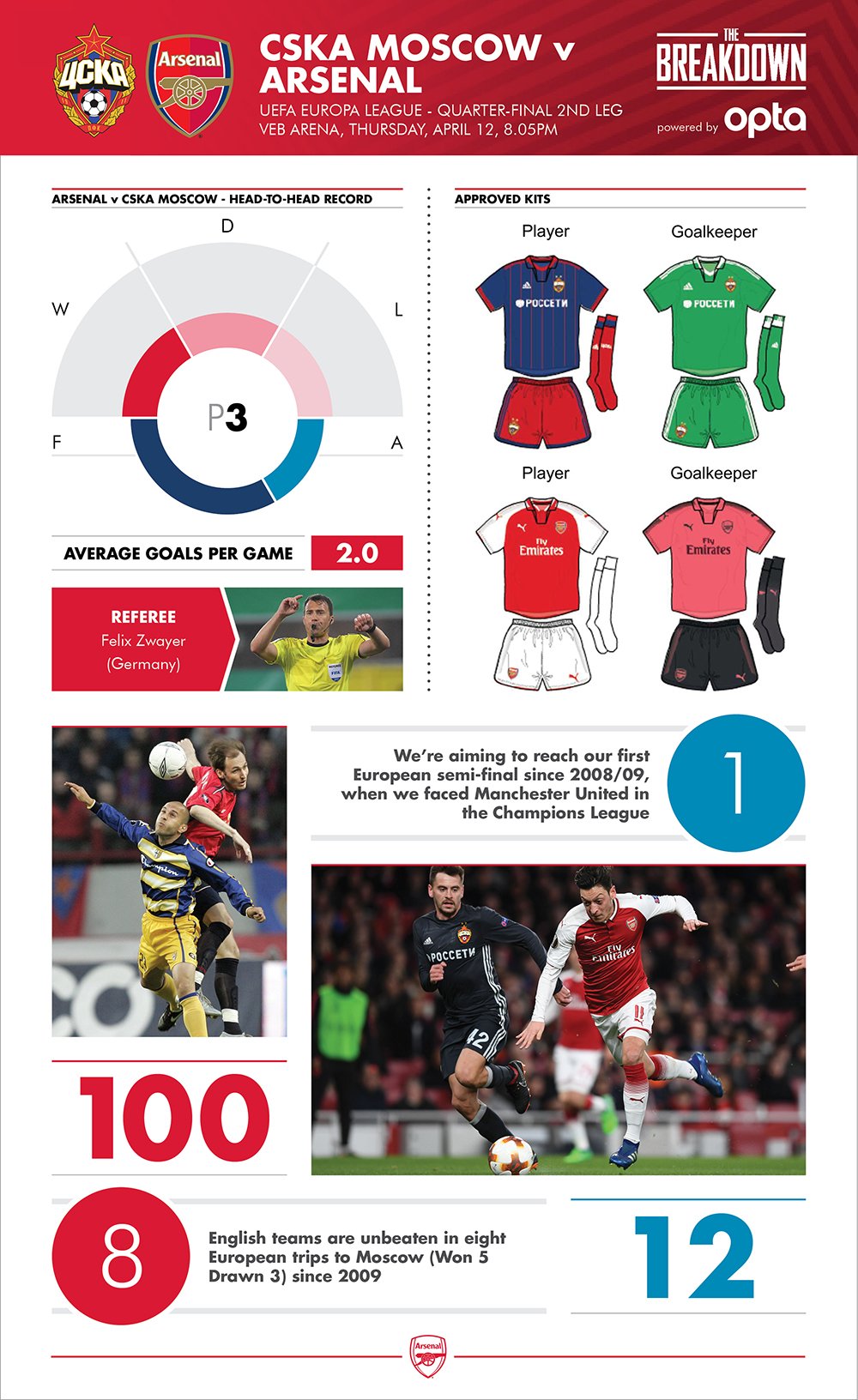 PLAYING AWAY IN THE SECOND LEG

In the two previous Europa League knock-out rounds we played the second leg at home, defending healthy first-leg leads, and the boss wants us to continue the excellent away form in the competition regardless of the first-leg scoreline.

"Milan is a good example for us to have a different attitude away from home,” he said. “But that was the first leg, so we have to overcome the hurdle a little bit, of thinking we have something to defend and play like we did in Milan. The teams who went out this week conceded early and then it was hard for them.

"We have an advantage, the best way to build on the advantage is to try to win the game, we play with our best possible team, have a positive attitude and try and win the game."

"CSKA can be lethal on the break – they use a two-man strikeforce, but in a way neither is a true centre-forward.

“Ahmed Musa, on loan from Leicester City since January, is an electric speedy winger who offers a constant counter-attacking threat, and in this system will look to make runs into the channels to collect long passes, perhaps in the mould of his ex-teammate Jamie Vardy.

“Alongside him is Brazilian Vitinho, a brilliant all-round attacker capable of genuine moments of magic, and very adept at shooting from long-range. Arsenal must watch him carefully."

"His performances are very good and he is a regular player in the Russian team so that means he is a very strong player. In fact you look at CSKA they have two regular players in midfield who play for Russia so they have the best midfield in the country."