Arsene Wenger enjoyed a family Christmas for the first time in years - but he still spent much of it mulling over the three goals we conceded against Liverpool.

Such is the life of a football obsessive. Even the festive season can’t distract the boss from the Premier League season and that’s one reason why our trip to Crystal Palace will see him equal Sir Alex Ferguson’s record of 810 games in the English top flight.

Palace, of course, inflicted one of our most humbling defeats of 2017. Ahead of Thursday’s trip to south London, Wenger no doubt has those particular three goals in his mind as well.

You’re in the right place for a comprehensive pre-match briefing. Watch some classic goals, hear from the boss, get the latest team news and test your knowledge. 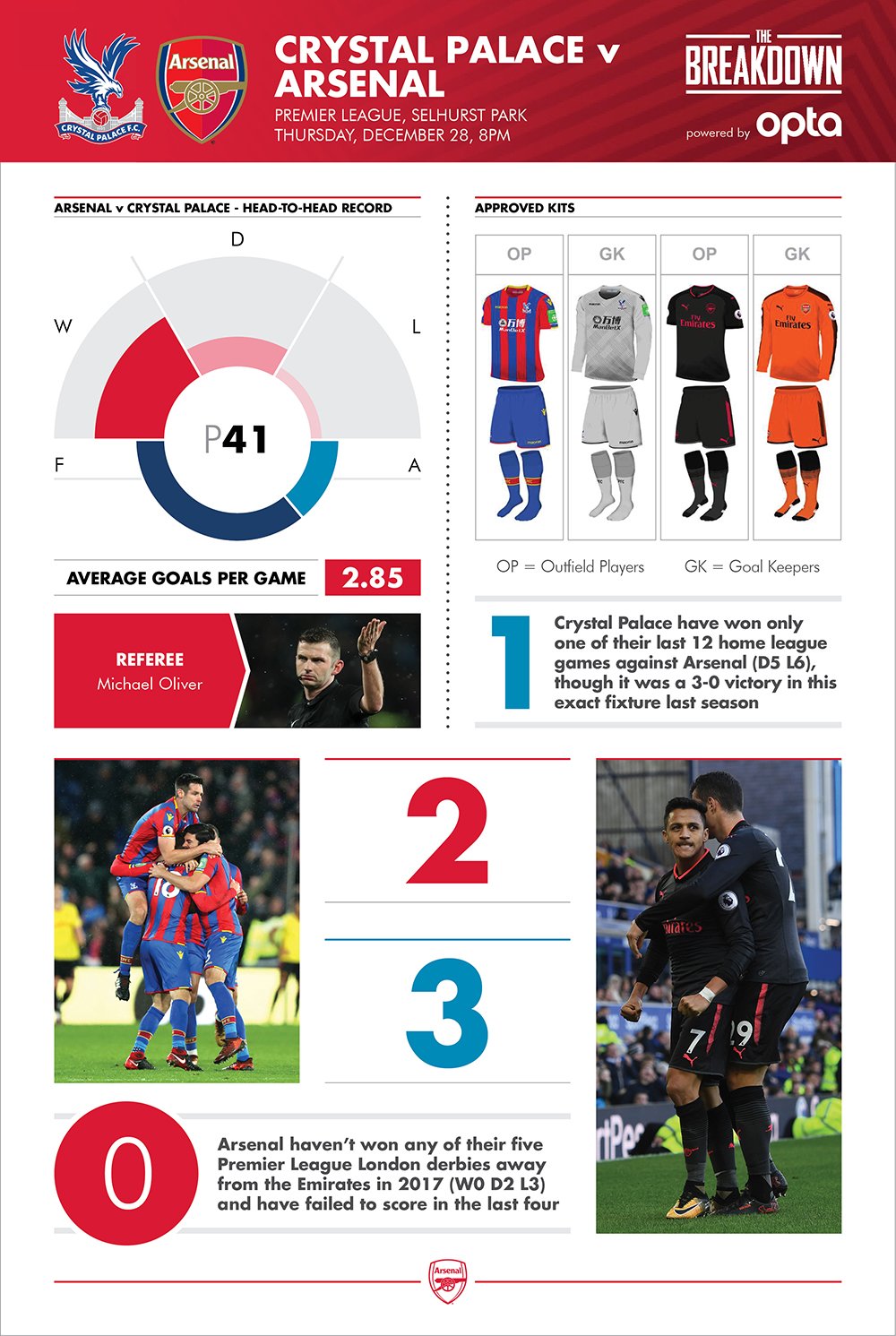 Our decision-making and defensive work came under scrutiny after the 3-3 draw against Liverpool - but you can’t question our effort or endurance.

The team made more than 600 sprints (for the second time this season - the first was against Tottenham). Alex Lacazette made a season-high 71 sprints. Granit Xhaka covered more than 13 kilometres. You might argue that we could channel that effort differently, but the numbers are impressive.

“Yeah, we gave a lot,” said Wenger. I give credit to the team because even under very difficult circumstances, we came back and you could never feel that there was any sign of renouncement in the team. The desire was absolutely magnificent.

“I believe as well that we had no choice. Sometimes you dominate in games where we have 70 per cent of possession, and you play for example in one half. Once the game is more balanced, like against Liverpool, and you chase the game, it goes up and down, especially with a counter-attacking team like Liverpool.

“The distances are bigger, the sprints are higher, so sometimes the tactical history of the game explains the physical impact on the players. But of course, you can produce it or you cannot. Either you want to push yourself or you don’t want to. It shows that the players gave absolutely everything.”

“Wilfried Zaha is in superb form, whether fielded up front or on the flank. He recently assisted James McArthur’s last-minute winner against Watford in hugely impressive circumstances – after moving to the left flank, Watford manager Marco Silva introduced Kiko Femenia to play as a second right back in front of Daryl Janmaat, such was Zaha’s threat. But the winger dribbled past both to set up McArthur, showing that even ‘doubling up’ against him isn’t always successful.”

“It is just a consequence of dedication to my job that I love, and to luck because this club trusted me always, and to loyalty and as well to the sacrifice of your life because that is what this job is about. And to health because I have not missed a single game in 21 years, so for that you need to be healthy and lucky.”