It’s eight weeks since Eddie Nketiah came off the bench to transform our last Carabao Cup tie, but you don’t have to wait for this competition to come around to see our academy talent gracing the first team.

Just a few days ago we had four graduates on the field against Newcastle in the Premier League - Alex Iwobi, Jack Wilshere, Hector Bellerin and Ainsley Maitland-Niles. What an incentive that is for the teenagers who crave game time against West Ham on Tuesday.

Arsene Wenger’s latest crop will be vying with first-team fringe players for a starting spot in our quarter-final tie - and who might be the hero this time?

Stay on this page to find out more about our Carabao Cup squad, hear from the boss, test your knowledge and watch some classic goals. 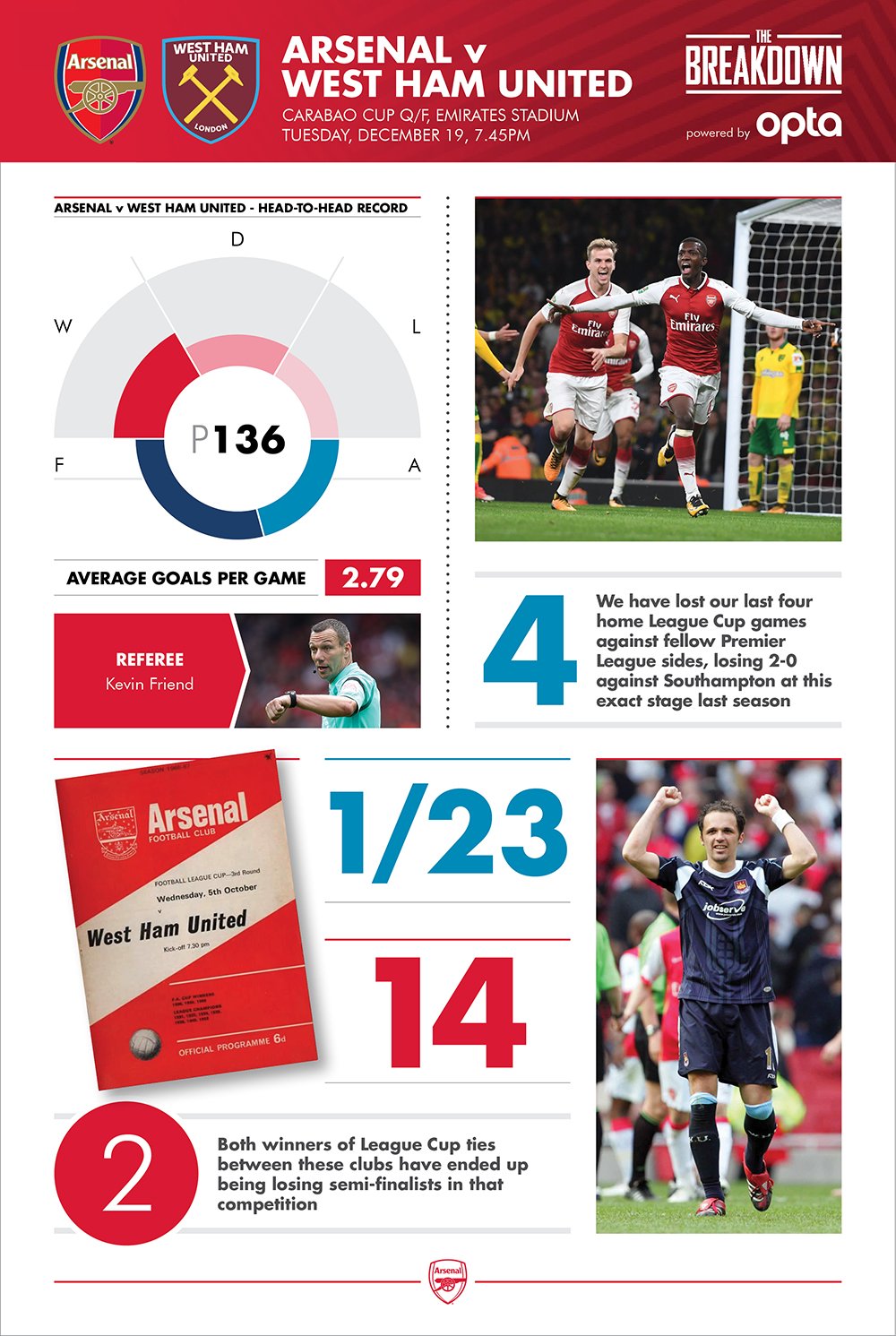 Looking forward to a London Derby, under lights at the Emirates. Doesn't get much better! #COYG https://t.co/YMsdzWzi2B

ONE TO WATCH: BEN SHEAF

“I like Ben Sheaf because he’s committed, intelligent, reads the game very well and is good on the ball,” said the boss. “I see him as a centre back because he reads the game well, he anticipates what the opponent will do and he’s good in challenges. It corresponds well to his personality because he likes to help out others and sees danger, and when you play at the back you need to put yourself in the brain of the opponent, but as well you need to save your partners and like to help. I think he has these two ingredients.”

Michael Cox says: In the league, Moyes has been delighted with three-man defence of Winston Reid, Angelo Ogbonna and left-sided Aaron Cresswell, who has moved inside from full-back to impress in a more central role. Veteran James Collins may be introduced to offer more aerial power and youngster Declan Rice provides extra mobility. Cheikhou Kouyate can be deployed in either defence or his more traditional midfield role, but Jose Fonte and Sam Byram are out injured.

In attacking positions, Moyes also has several options. By virtue of playing without a conventional striker last week, he boasted a substitute’s bench featuring four established international forwards. Javier Hernandez provides speed in behind the opposition bench, and hit the bar last week after being introduced in the closing stages. Andy Carroll is a familiar opponent for Arsenal – he hit a hattrick in Arsenal’s final trip to Upton Park last year. Andre Ayew is a speedy player who will probably start wide, while Diafra Sakho has an intriguing record this season – no starts and 13 substitute appearances in the league, two starts and two goals in the Capital One Cup. He’s likely to feature in a wide role here.

THE FINAL WORD… ON A NEW GENERATION

Since our last Carabao Cup game there have been new deals for Eddie Nketiah, Matt Macey, Ben Sheaf, Joe Willock and, most recently, Jordi Osei-Tutu and Joseph Olowu.

“It’s a very exciting bunch of young players,” said the boss, “and they went recently to Manchester City and won in a convincing way.

“I made the decision a few months ago to try and keep them at the club because I believe they all have futures at the club. I am convinced as well that it is very important for Arsenal to continue giving chances to young players we educate here.

“I am convinced that if you can get four, five or six out of your own homegrown [group] then it is a kind of mentality, a sense of belonging, two values you have identified with since childhood that make you stronger. It gives you a few per cent more as a team when you come together.”