“Every game is an education,” said Arsene Wenger. “You play in front of 60,000 people who don’t look at your passport, they want to see good passes, good movement, quality football.”


On Tuesday night, the education continues. Our talented youngsters have passed tests against Doncaster, in Belarus and, most impressively of all, in Belgrade last week. Now another lesson awaits as in-form Norwich City visit the Emirates for the fourth round of the Carabao Cup.

It’s a chance for Alexis, Mesut Ozil et al to take a breather and a new generation to step into their shoes - helped, no doubt, by wise older heads like Jack Wilshere and Theo Walcott.

Find out more about our likely line-up and enjoy classic goals, an exclusive chat with the boss, match facts and a chance to test your knowledge. It’s all in our pre-match briefing. 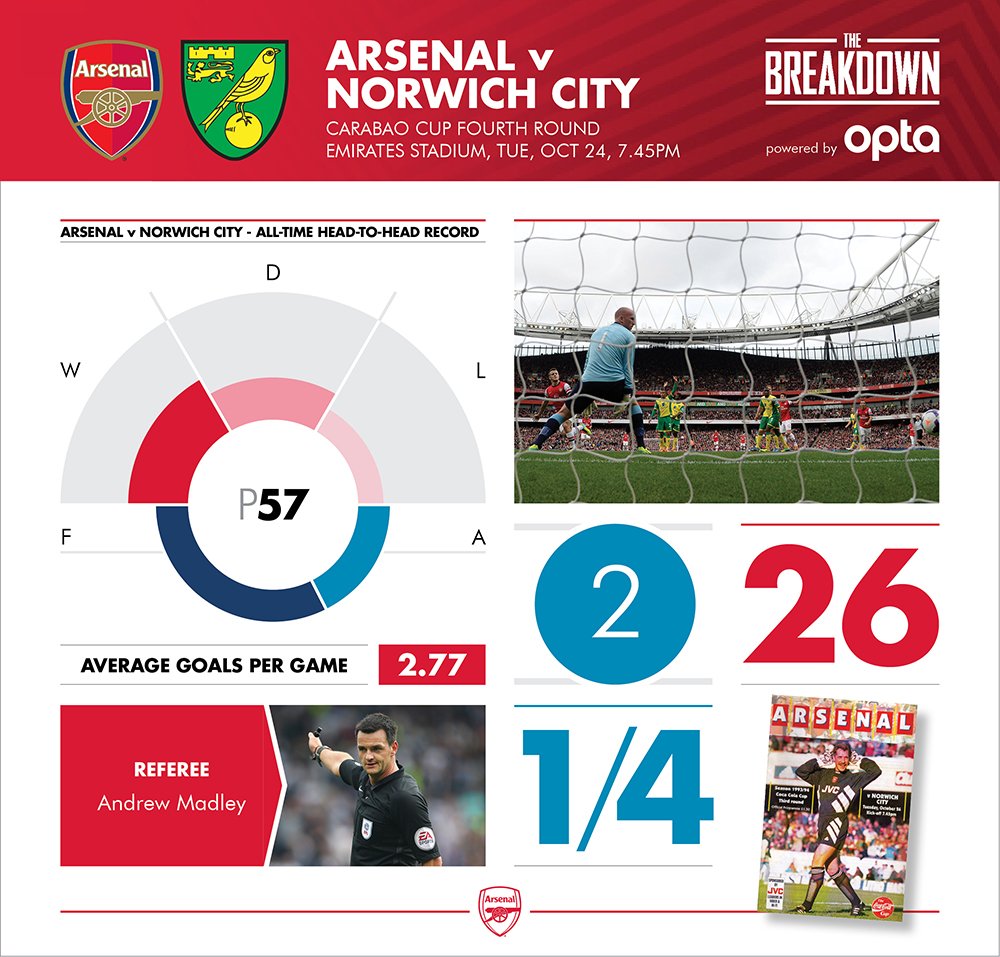 Ainsley Maitland-Niles is likely to start against Norwich, but where? He’s played all over the place since breaking into the first team, and the boss admits that it’s both a blessing and a curse for the 20-year-old.

“The huge advantage of Maitland-Niles, and the disadvantage as well, is that he can play everywhere,” said Wenger. “Sometimes when you’re a manager, you use the comfort of being able to get him to play wherever you need him to. He can play on the flanks without any problem because he has pace, he’s an intelligent boy and I think he needs to add that little bit of extra force for 90 minutes. But he’s so comfortable on the ball, so quick, so good and can steal the ball too.

“He can also play central midfield, but I must say that he’s close now to being a regular in the first team as well. I would be on my toes if I was a regular player in the Arsenal first team. His preferred position is central midfield and that’s where I believe he will end up.”

Michael Cox on Norwich: "Up front, Farke is able to call upon Championship veteran Cameron Jerome, as well as Nelson Oliveira, whose career stalled after reaching the Euro 2012 semi-finals with Portugal, but has performed impressively this season.

“They combined recently for a late equaliser against Hull following a long throw from Marco Stiepermann, and Norwich might look to maximize set-piece opportunities here. Marley Watkins, less of a natural centre-forward, has also been pushed forward into a forward role on occasion.

"Norwich are a good footballing side by Championship standards, but their approach will probably be more cautious, structured and direct than usual.”

THE LAST WORD… ON GIVING YOUTH A CHANCE

Wenger has never been reluctant to give young players an opportunity. Indeed, he sees it as a duty. Fortunately for us, this latest crop of Arsenal talent is especially strong.

“We didn’t have that strength for a while and now we have a generation of 18-year-old players who are exceptionally strong,” said the boss.

“I still believe that one of the problems in the Premier League at the moment is that these boys do not get enough chances. That’s why I’m keen to do it and I want to do it. If you look around you, the fact that the Premier League is so demanding means the young boys are very quickly under pressure, and that’s why you maybe see less of them appear.

“If you look at the results of the English national youth teams, they look like one of the best nations in the world, but the responsibility falls on club managers like us to give them a chance.”