When the full-time whistle blew at Stamford Bridge two weeks ago, it was hard to assess who the goalless draw in our Carabao Cup semi-final first leg favoured. Was it the hosts, who had not conceded an away goal, or us, who will host the decider at Emirates Stadium with no deficit to recover?

We'll find out this evening, in our fifth encounter with the Blues in a little over five months. None of the previous four matches were settled in 90 minutes - although we did win the Community Shield on penalties - and it is hard to imagine anything other than another fiercely-contested clash between two evenly-matched sides.

With the Alexis/Mkhitarayan saga having finally reached its conclusion, it is good to turn the focus back to on-pitch matters - and although our new signing is not eligible to play, his team-mates will be desperate to seal yet another trip to Wembley, to face Manchester City in the final on February 25.

Read on for a comprehensive pre-match briefing: we’ve got classic goals against Chelsea, team news, an exclusive chat with the manager, match facts, graphics and a chance to have your say. 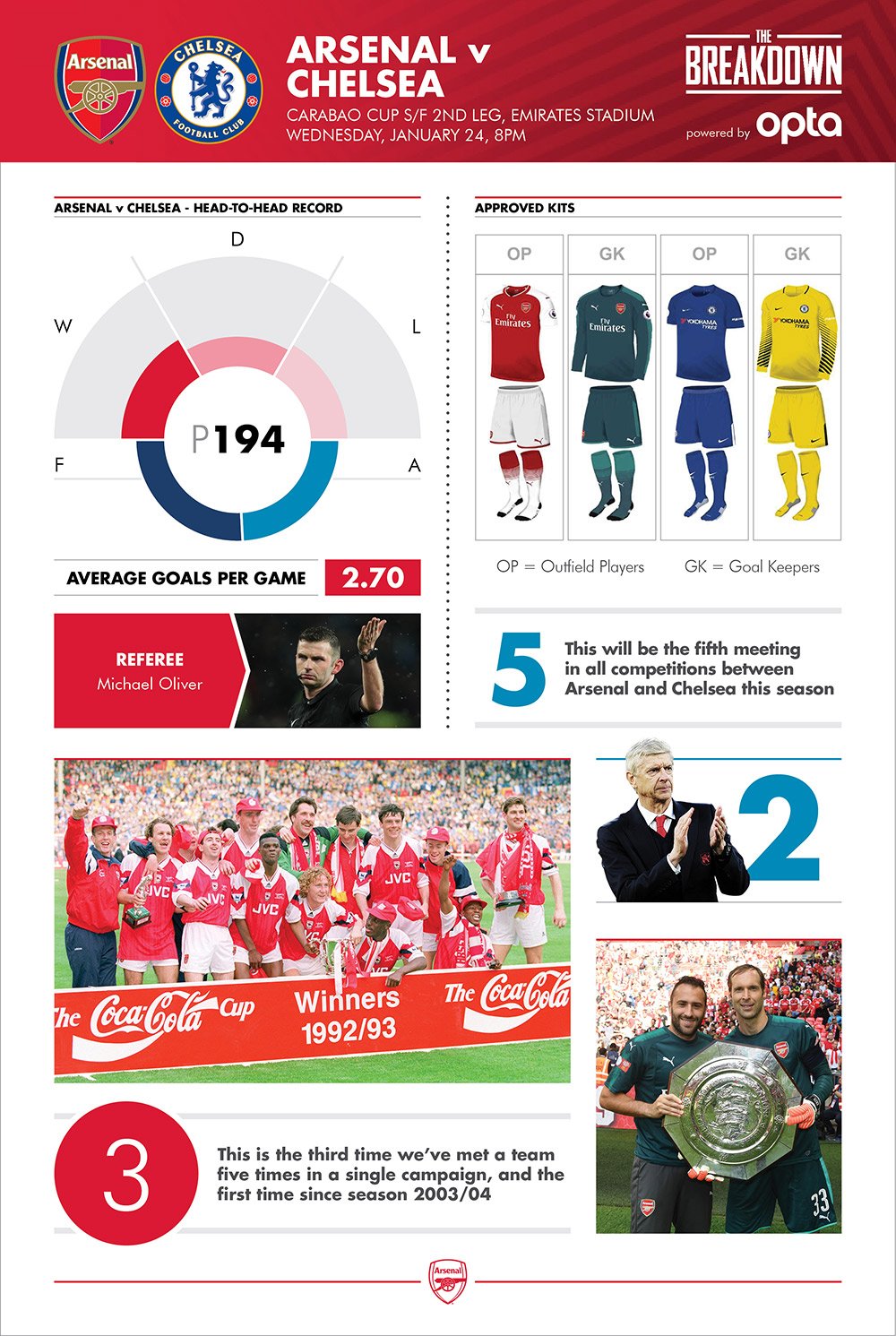 Wenger on facing Chelsea for the fifth time this season...
“If you include the friendly we played in China on top of that, it’s a fact that we know each other very well. It’s very difficult to surprise your opponent. You even know the response you will get from the bench during the game. They certainly know as well, so overall I would say it puts it down to the form of the day, and down as well to how [high] your motivation is on the day, how much you want it. It will be down to that."

Tactical expert Michael Cox:
“Peculiarly, Chelsea's greatest source of creativity this season has been right-sided centre back Cesar Azpilicueta, who has assisted Alvaro Morata no fewer than six times by pushing forward into more advanced positions, and then curling crosses from narrow positions into his compatriot. Morata may be out, but Azpilicueta may attempt the same passes."

Wenger on how he assesses the tie after the first leg…
“The tie at Stamford Bridge was like the first game of qualifying in the semi-final - that means let’s at least be in the game for the second leg. That was what it was about. It was a bit of a ‘block’ game. You could see a completely different game this time. That’s why for us it’s very important that we start well and take advantage of what we have done against Crystal Palace. That means being on the front foot from the start. Certainly in the second game they will try to attack, we will try to attack, so it should be a much more open game."