With all the tributes, the analysis and the outpouring of emotion surrounding Arsene Wenger's final home match in charge, it’s easy to forget that there a game taking place on Sunday.

The man himself would be the first to remind us of that - his side realistically need a draw to all but secure sixth place and automatic entry into next season's Europa League. But try telling that to the 60,000 inside the stadium and millions more watching around the world, eager to pay their respects to the man known to us as 'the Boss'.

Inside and outside Emirates Stadium there will be a host of activities in honour of Wenger, from a tribute book in the Armoury to commemorative t-shirts being handed out to every fan to wear. Once the final whistle blows, we will continue to show our love and thanks for the manager, as well as waving goodbye to Per Mertesacker, Alex Scott and Vik Akers.

But first will be the match, Wenger's last 90 minutes in charge in north London on an occasion that is sure to stir the emotions of everyone connected to the club. Let’s make sure that it is a farewell that will resonate the world over.

Read on for a comprehensive pre-match briefing: we’ve got classic goals against Burnley, team news, an exclusive chat with the manager, match facts, graphics and a chance to have your say. 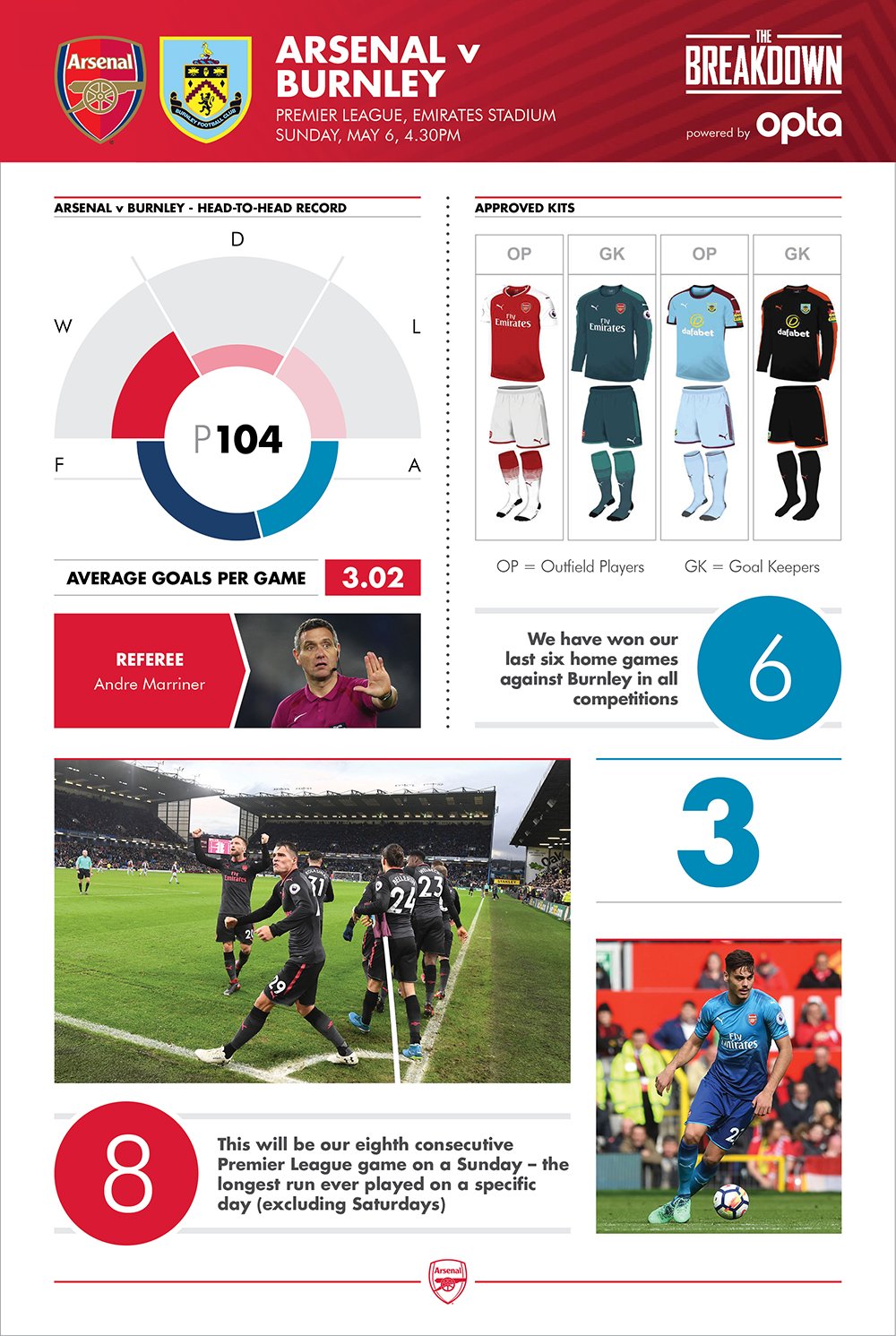 Wenger on feeling the love from the fans…

"I have met so many nice people on a daily basis who really appreciated what I tried to do, or what I did. I would like to be very thankful for them, because for me it's an opportunity as well to thank people who have been so faithful. I had the luxury basically to manage for 22 years in a sold-out stadium. That is a real luxury in life when you are in my job."

“Burnley’s style of play has evolved this season, although they remain the Premier League’s most old-school side in a tactical sense - statistics show they have won the highest number of aerial duels but have the worst pass completion rate. But their strength is unquestionably the defence - only Manchester City, Manchester United and Tottenham have conceded fewer."

Wenger on his challenge when taking over in 1996…

“When I came here, you had no history of foreign managers being successful in England. It's very difficult to put that into context again but I must say, what was always the charm of Arsenal for me was the challenge, because it was for me to adapt to the local culture.

“Also Arsenal has always been a club who manages to combine the tradition and moving forward. My challenge was to move the club forward and also respect the tradition. When I arrived Liverpool and Man United were the best teams, they had great players. And that was the challenge to stand up to."