It’s been a long two weeks - it always is when a crushing defeat is followed by an international break.

But some sort of salvation for that forgettable day at Anfield is finally on the horizon. Three points against Bournemouth on Saturday would lift us up the Premier League table and build some much-needed momentum at the start of a hectic run.

You’re in the right place for a comprehensive pre-match briefing - we’ve got classic goal clips, team news, an exclusive chat with Arsene Wenger, match facts, graphics and a chance to test your knowledge. 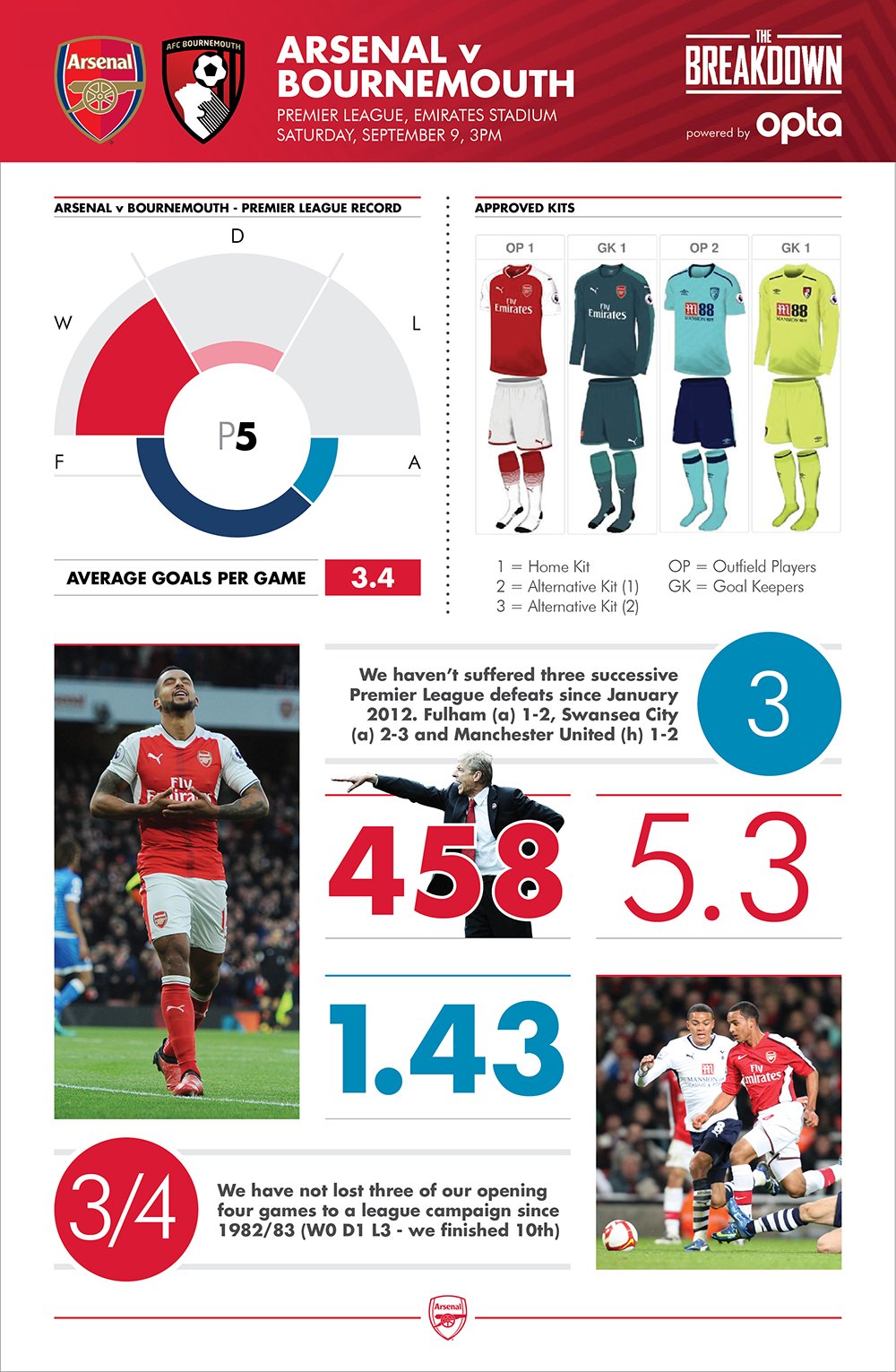 Wenger: “Retiring from international football has helped him. It’s good to release the mental pressure when you reach a certain age. You recover less quickly and you are more prone to injuries when you get over 32. To have a little breather on international breaks sometimes helps, especially in England where there is no winter break. During September, October and November you go away and, on top of that, you’re under pressure and that puts a a lot of strain on your body. At some age, you have to make that decision.

“What you wish is that he plays on for a long time. The only thing you can say is that you have to look at the performances. At the moment, the performances are very good. His attitude is focused on improving on a daily basis. He’s absolutely fantastic. Like many goalkeepers, and him even more, they are professional because they have a huge sense of responsibility. Any mistake goalkeepers make, they are criticised for and the goalkeepers are always very conscientious."

Adrian Clarke: "They played well against Manchester City and, if they play that well against Arsenal at Emirates Stadium, they’ll give us a run for our money. They’re an excellent footballing side and I remember commentating on this fixture last season, and they took the game to Arsenal. The dominated the game for long periods and caused problems.

"I’m expecting the team to come back from this break fully fired up and I hope they can outmuscle Bournemouth. If they’ve got a weakness, sometimes it’s them being a little bit soft. If you can get in amongst them and be more aggressive than them, I think we’ll have no problem winning the game. This is not a side to be taking lightly, that’s for sure.

"They’re going to score goals this season, I just hope they don’t spend too much time in Arsenal’s final third this game. Because the confidence is a bit low among the first team at the moment, we need to keep Bournemouth out of our own defensive third. Once they get there, I think they can cause Arsenal problems."

Come on Arsenal, Can't wait for the match against Bournmouth❤️❤️

Wenger on pressing the reset button: “I have a good experience and experience helps in that. I’m convinced that we shouldn’t become too emotional. These players who were great three weeks ago have not lost their football [ability], and our target remains exactly the same.

"We have a home game now and we know it’s very important to be strong at home if you want a successful championship [challenge]. On top of that, there’s always a lot of noise after a defeat where the performance was not at the level, but we need our fans to be behind the team.

"They can make their mind up on whether we are good enough, but that will not help us. We agree that we did not have the expected performance but we can only have a good season if we all stick together and focus on the next game.”

Could not retrieve the oEmbed resource.