If Arsène Wenger is feeling any nerves ahead of what could be a defining night, both for our season and his legacy, he did a good job of hiding it at Wednesday's pre-match press conference.

The Arsenal manager was in fine form, joking with the media and taking questions about what the future holds beyond the end of the season with his customary good grace.

But when talk turned to Atletico Madrid, his steely-eyed focus was obvious to everyone packed into the media room at London Colney. He made clear his respect for Diego Simeone's side, he underlined his total commitment to winning the tie and dismissed talk of fairytale endings. We would only win this clash, and the Europa League, if we perform to our capabilities - not because it is written in the stars.

The semi-final draw could not have been tougher, but Wenger seems to be relishing the test this final act in his Arsenal story presents. He has backed his players to rise to the challenge, now it is their turn to respond.

Read on for our comprehensive pre-match briefing. We’ve got goals, team news, quotes from the manager, match facts, graphics and a chance to have your say. 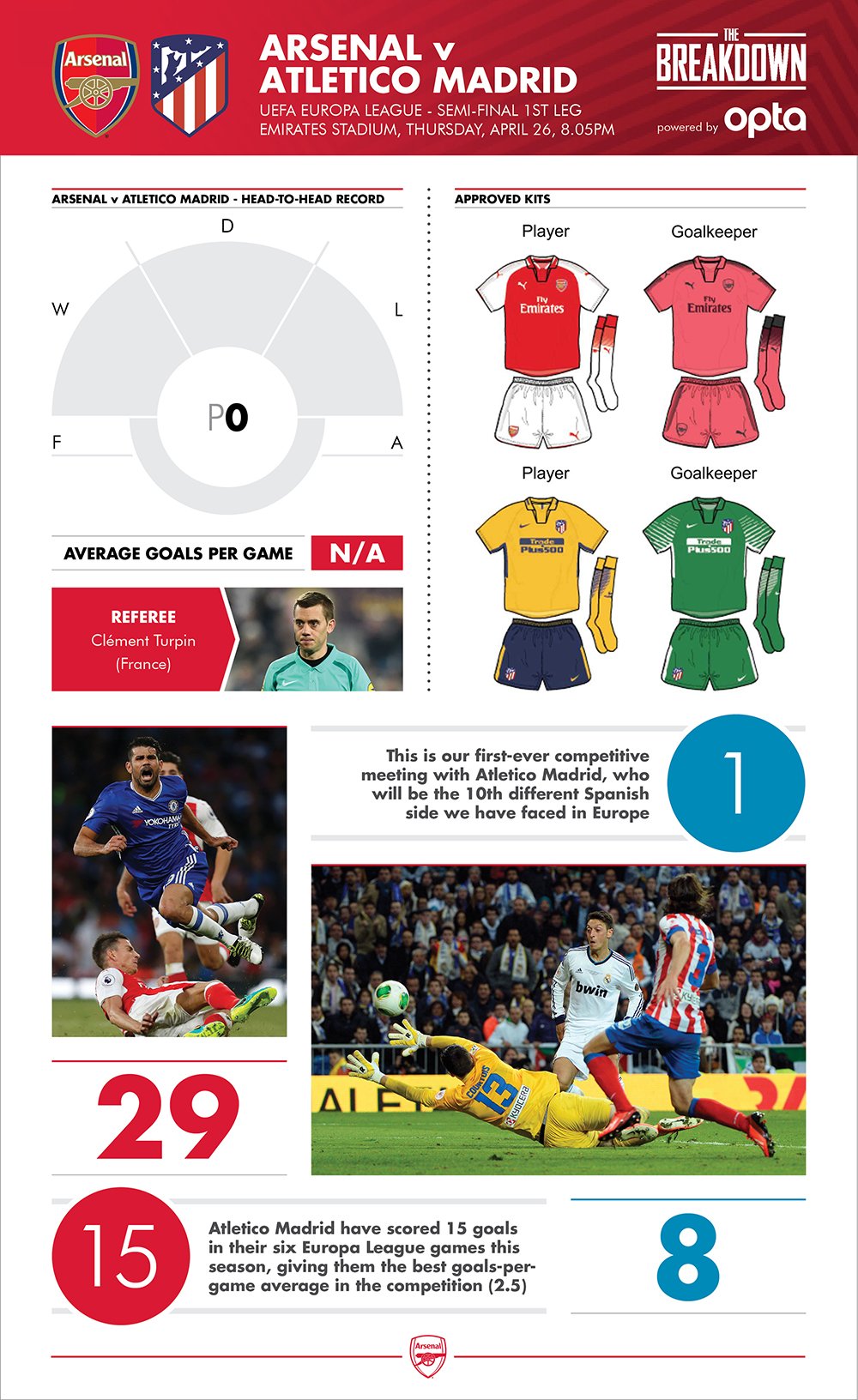 Wenger on the best way to secure a first-leg lead...

“To play to our strengths. We're a team that like to dictate the game and have the ball. Of course we want to try to eliminate the strengths of Madrid. They are a very strong team. If you look at the table, they are the second best team in Spain. That will demand total commitment on our side and a great discipline. They are strong defensively, they are strong offensively, so we’ll need a complete performance."

“Antoine Griezmann is the star, a good all-round forward who can lead the line or play a little deeper. The latter is more likely here, with the familiar figure of Diego Costa prowling the channels on the break. Fan favourite Fernando Torres is another option and can play a hard-working role, and Kevin Gameiro is a clever finisher. Atleti will focus on keeping it tight at the back, and hit Arsenal on the counter-attack."

Wenger on it resembling a game of the past...

"It is [like] a Champions League night, of course. It is a double level - first of all because a Champions league position is at stake, more for us than them; and secondly because the two teams are two clubs who are used to playing in the Champions League, so that is why I believe it is [like one of those] nights."