As the record-breaking, history-making, 13-time Emirates FA Cup winners, the spotlight will fall on us this Sunday as we commence our defence of the trophy, away to Nottingham Forest.

Last May's triumph over Chelsea brought Arsène Wenger's tally of victories in this competition to seven - also a record – so it's no surprise that he always looks forward to this time of year.

Like last season, the road to Wembley starts with a trip to face Championship opposition. And last January's hard-fought, late win over Preston North End should serve as a warning to the Gunners this weekend, even if Forest are currently under the caretaker management of Gary Brazil – following Mark Warburton's dismissal on New Year's Eve – and lie in 14th place, with no wins from their last five and no goals in their last three.

Wenger believes that the switch of competition is a welcome diversion for us as well, "in the sense that in the FA Cup we have had positive experiences," but the boss is keen that the team maintain the quality of attacking football on show against Chelsea on Wednesday evening.

There will be changes to the lineup, as usual for cup games this season, and Wenger confirmed "fresh players" will come in. But the FA Cup is once again being prioritised by the boss, who is looking to extend his proud record of never falling at the first hurdle.

This will be his 22nd FA Cup campaign, and as he targets trophy number eight - and what would be our fourth in the space of five seasons – we preview the match with classic third round goals, team news, an exclusive chat with the manager, facts, graphics and a chance to have your say. 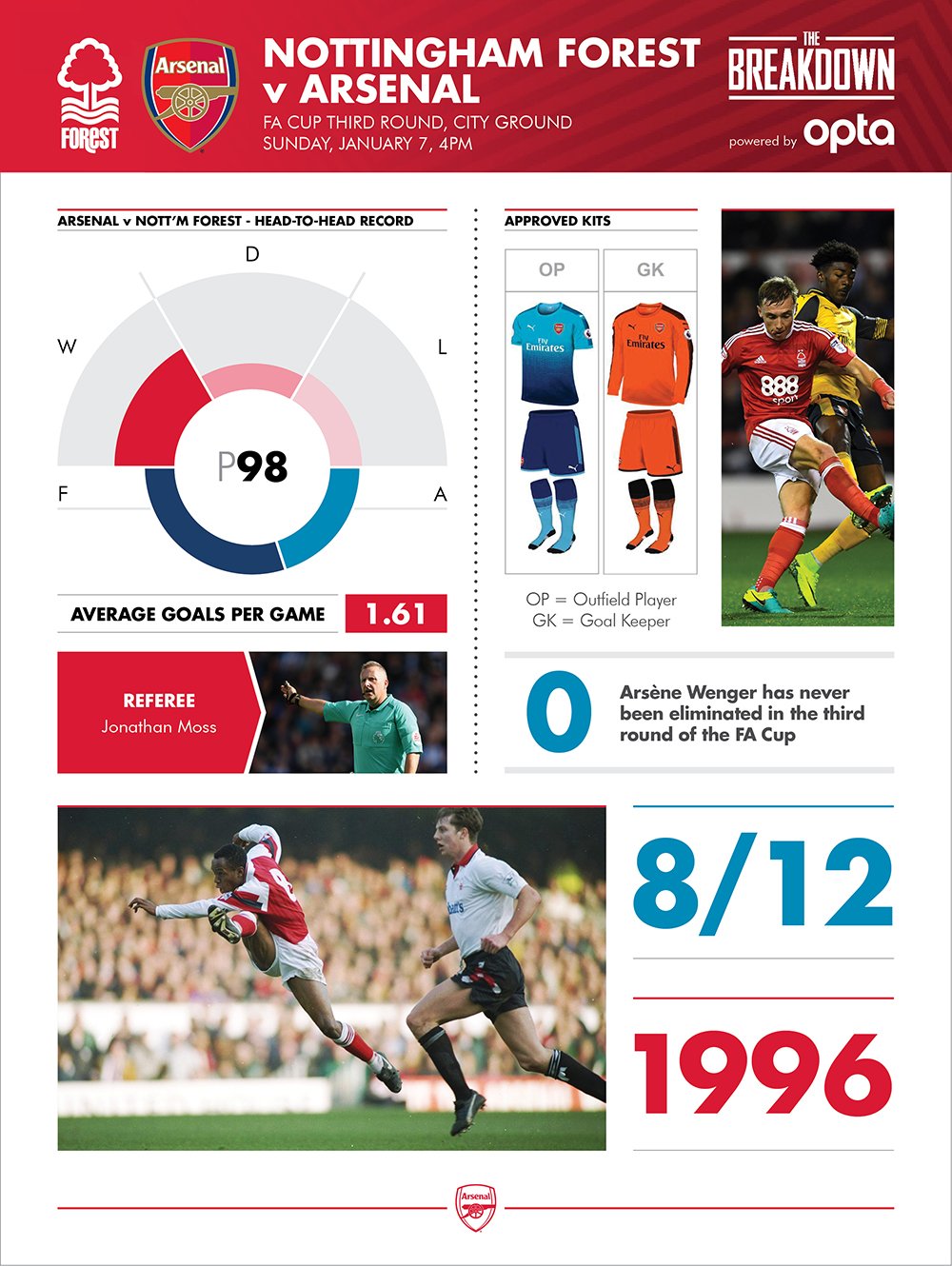 "Yes, of course, but there is an incentive as well to maintain our record, and overall the FA Cup is a very important competition. To win trophies - in every country - is so difficult, that everybody really goes for it, absolutely and completely.

"That’s why we want to be successful when we come into the competition. Overall I believe the group is focused, positive in the way we play football and it’s important to have a continuity there."

“Ex-Gunner Armand Traore has been amongst Forest’s best performers this season, but he retains a tendency to push forward and leave his left-back zone exposed, so Arsenal might get joy when breaking into that zone.”

Wenger extending his unbeaten run in the FA Cup third round…

"Touch wood, let’s make that continue. You come out of the Christmas period overloaded a little bit with the games, so it’s important to maintain focus and concentration, and to prepare well.

"We know that the first round, or the third round as you call it here, is a very important one because it’s always very difficult to get going in the competition, and have your level of preparation right."