Sunday is the final goodbye. After this game that really is it.

Since the manager announced the end of his record-breaking tenure last month, there has been a succession of 'lasts' and farewells, giving the fans - and the man himself - time to slowly adapt to the idea of Arsenal Football Club without Arsène Wenger as its manager.

The highlight was last weekend's emotional Emirates send-off, and since then Wenger has conducted his final pre-match press conference, taken his staff out for a farewell lunch and this weekend he will oversee his final training session, and pick his last starting XI before taking charge of his final match.

In many ways Sunday's game at Huddersfield's John Smith’s Stadium is one of the least noteworthy of all the 1,235 games he has presided over. We will finish sixth no matter what the result, and the hosts have little to play for too, having secured Premier League survival with an impressive draw at Chelsea on Wednesday night.

But whatever happens on Sunday, the match will go down in history as the end of an era. So it's perhaps fitting that the opposition has such strong links to Arsenal folklore.

Another of the club's great visionaries, Herbert Chapman, led Huddersfield to their first-ever league championship – the first of a hat-trick of titles – way back in 1924 before he moved to Highbury to lead us to our first three major honours.

Our last 10 trophies have all been won by Wenger, and fans will no doubt reminisce about those successes on Sunday, but right now the boss is looking for just one more victory to end a wretched away run.

The defeat to Leicester was our seventh in a row on the road in the Premier League, and the manager said that even though this is his final game in charge, his priority is reversing our away form.

"At the moment I don’t think about my future at all," he told the assembled media in his final ever pre-match press conference. "I don’t realise it’s my last press conference because I have just the Huddersfield game in mind, and try to do my job as well as I can until the last minute I’m here."

Those remaining minutes are continuing to tick down, and to preview this historic match we bring you team news, his last press conference, Michael Cox's verdict on the opposition, facts, graphics and a chance to have your say. 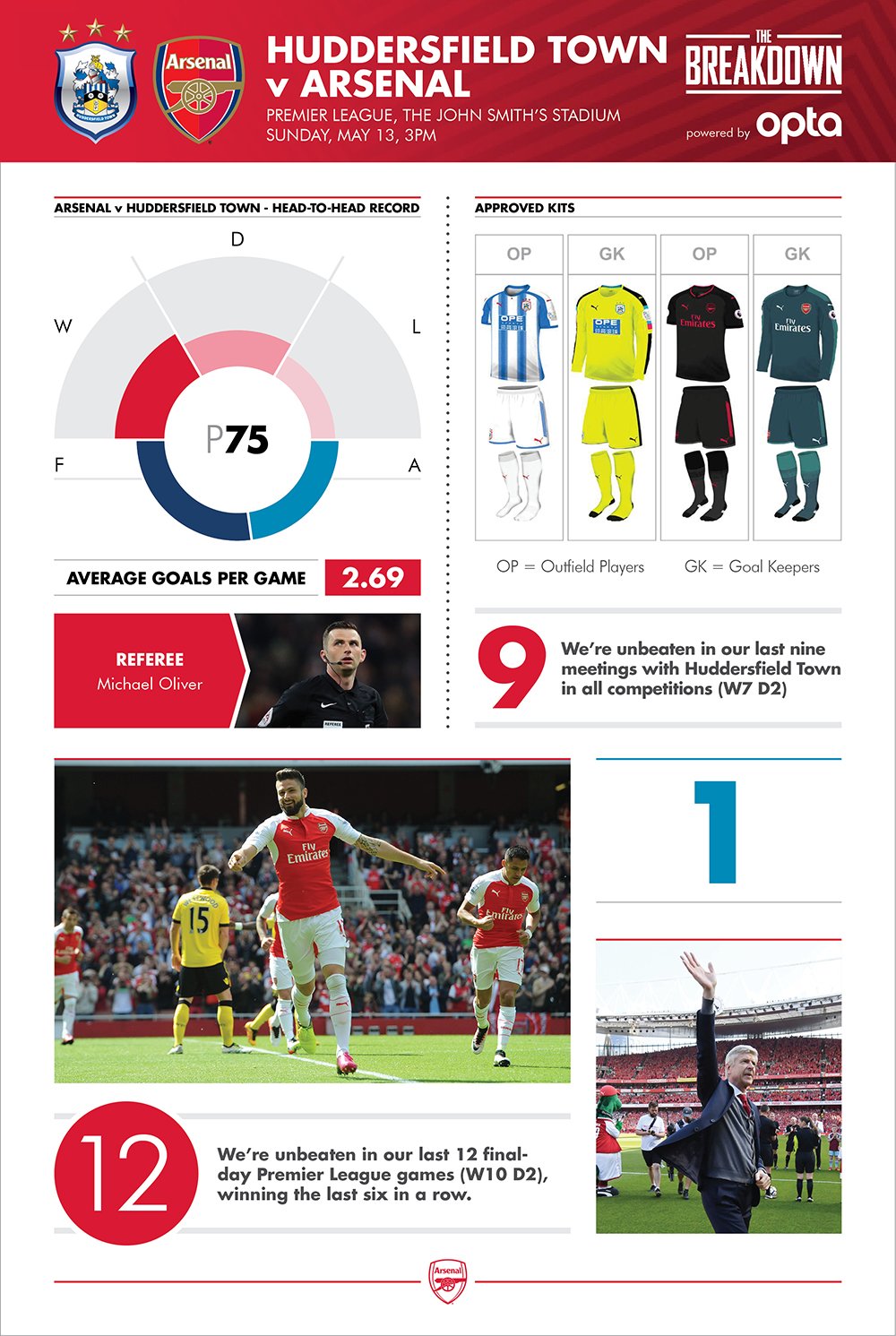 GOING OUT ON A HIGH

There might be little at stake on Sunday, but the manager has been reminding the players of the importance of ending the season on a winning note…

"I will say to the players, ‘Look we have to prepare for the future, and the best way to do that is to win your last game and go in a positive mind into next season’.

“We have gone through a season of ups and downs but they have always created something special and I would like that to come out in the last game by the way we play it. In fairness that's what they did last at Leicester and I hope that for them, the best way to prepare for next season is to win the next game."

“Huddersfield are extremely well-organised without possession, capable of pressing well in midfield and keeping the opposition at bay with a high defensive line. There aren’t many superstars in this side, but the defensive organisation throughout the season has been hugely impressive, and is the main reason for Huddersfield’s impressive campaign.

“Aaron Mooy started the season in great form, and while his figures for this season – four goals and three assists – appear a little underwhelming, his driving runs from midfield represent Huddersfield’s main attacking threat.”

The Emirates faithful made their feelings towards our longest-serving manager clear last weekend, with the Burnley fans also joining in the 'One Arsène Wenger' chants towards the end of the game. The Leicester fans also serenaded the boss with that chorus on Wednesday, and the boss is grateful for the heartfelt valediction.

"They all love me now! It's a pleasant surprise. People respect somewhere that I tried to play football in the right way and I tried to give pleasure to people. The most important thing when you wake up in the morning is to go ‘oh, I watch Arsenal today – I have a chance to see a good game’.

“That is basically what I tried to do: to give people an experience in life that is not every day. Every day is not a pleasure. I think football has a responsibility, to try to give some people a special moment in their life. You do not always manage to do it unfortunately, but at least you have to give them the hope they can see something special and can be transported somewhere that they do not always experience on a daily basis."