The narrative would have been very different if Mesut Ozil had taken his chance just before Watford won a contentious penalty decision last weekend. But as it is we head to Goodison Park on Sunday still seeking our first away win of the Premier League campaign.

Everton have struggled away too, and their home form isn’t much better - Burnley and Lyon have both won on Merseyside this month.

Our pre-match briefing has everything you need ahead of Sunday’s game, with classic goal clips, team news, an exclusive chat with Arsene Wenger, match facts and a chance to have your say. 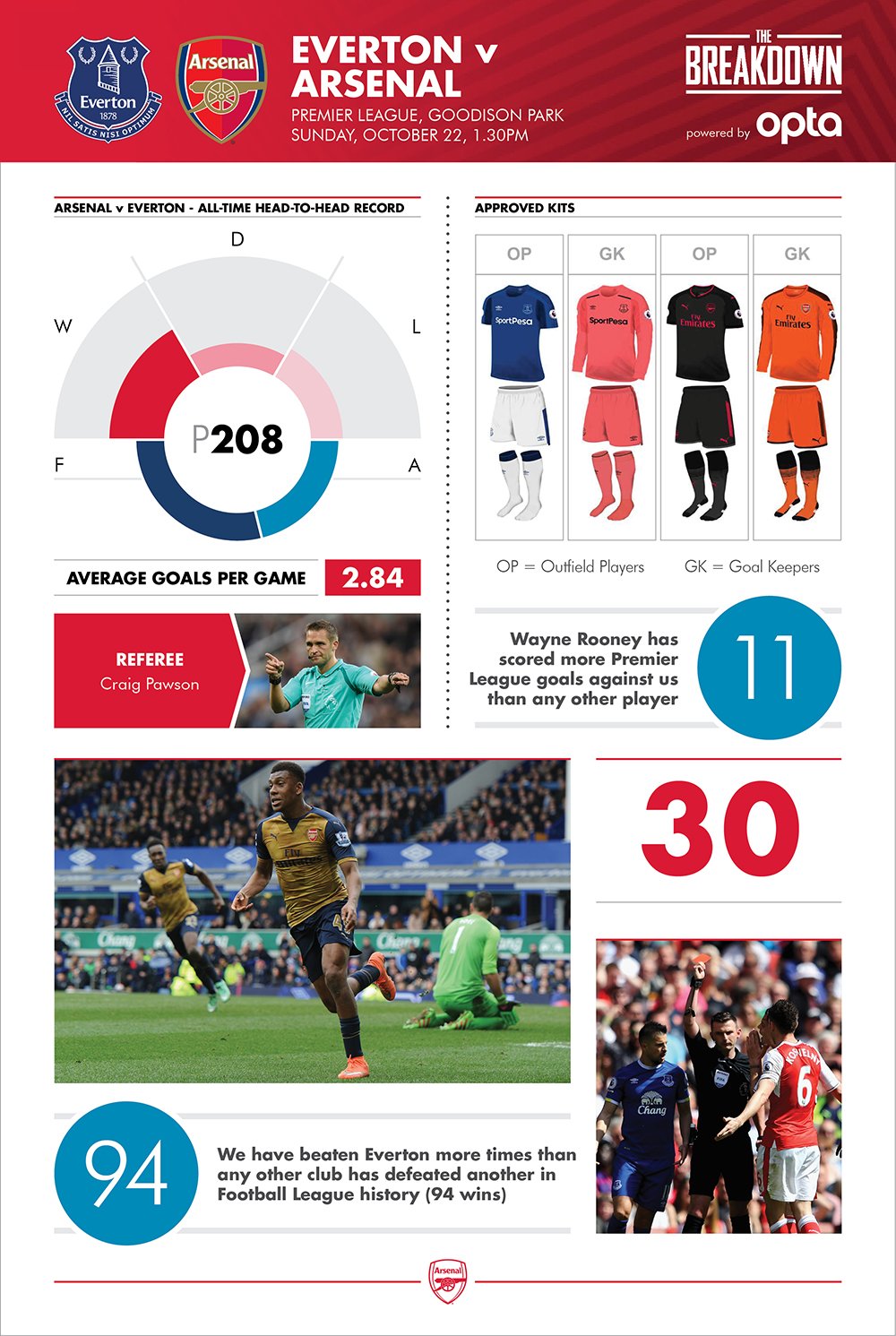 That line, delivered by commentator Clive Tyldesley, celebrated the arrival of Wayne Rooney as a footballing force 15 years ago this month. Regrettably he chose us to score his first Premier League goal against, and he’s added 10 more since then against Arsene Wenger. Those goals have hurt us but the boss has a lot of respect for Rooney’s achievements in a career that has taken him from Everton to Manchester United - and back again.

“I still remember [that goal in 2002] because he scored against David Seaman,” Wenger told Arsenal.com. “He came on and straight away you could see that this guy has special talent. If we speak about him now, it means that he lasted 15 years and at the top level that is absolutely exceptional - you need a special talent for that. Overall I think that sums it up well.

“As well [as Everton] he played long years at Manchester United and they were an exceptional side going forward. And Man United, especially at home, won always between 14 and 16 games and were an offensive force, and that is why he scored so many goals.”

“You can’t sell a player like Romelu Lukaku without having a replacement lined up. They sold him and then suddenly they went out looking for a load of strikers. They were surprised when clubs around Europe, who knew what they needed, said they weren’t going to sell to them or put high prices on their strikers. Everton were left hamstrung. Every squad needs different types of players.

“Olivier Giroud isn’t in the Arsenal side at the moment, but he’s a different type of striker to Lacazette. You need different skillsets for different scenarios and at the moment Everton have nobody to stretch the opposition. Too much of their play is in front of their opponents and that’s making them predictable and relatively easy to play against. I hope we’re not jinxing it here because they’re still got talented players. It’s much like I said before the Watford game: you can’t take anything for granted here.”

THE FINAL WORD… ON ROTATION

“Some of the Europa League players are making it hard to be left out of the Premier League games,” said Wenger. “That’s what you want. But I believe as well, once you go into the rotation and you have so many tight games with such a short period of time, we play Sunday, we play Tuesday, you’re a bit of a prisoner of that. You can make two or three changes but with the short period of recovery time, you cannot play all the 11 that played on Thursday - that’s impossible now.

“I have seen that freshness [in the players who haven’t travelled], especially when the games are repeated. At the moment, [they] play nearly every week. On top of that, in the Europa League, it’s very interesting for us to see some young players, how they resist to stress, how they resist to pressure away from home.”