Steve Bould built his reputation with us as a steely-eyed, teak-tough defender who was determined never to give anything away for free on the pitch.

The legendary centre back, now our assistant manager, displayed that same attitude in Thursday's press conference when he stood in for the ill Arsene Wenger.

Bould seemed to enjoy jousting with the media in the same way as he relished the heat of battle with opposing centre forwards. It was a fascinating head-to-head, with the Arsenal man staring down questions he felt were extraneous to football with the same glare he used to throw at strikers who started to cause trouble.

No, he wasn't here to talk about the manager, the Europa League or anything else, he insisted. This was about Stoke on Sunday, and gaining three vital points - and our fourth win on the bounce - and that was that. Bould, who spent nine years at Stoke at the start of his playing days, was certainly not giving anything away for free.

Read on for a comprehensive pre-match briefing: we’ve got classic goals against Stoke, team news, an exclusive chat with the assistant manager, match facts, graphics and a chance to have your say. 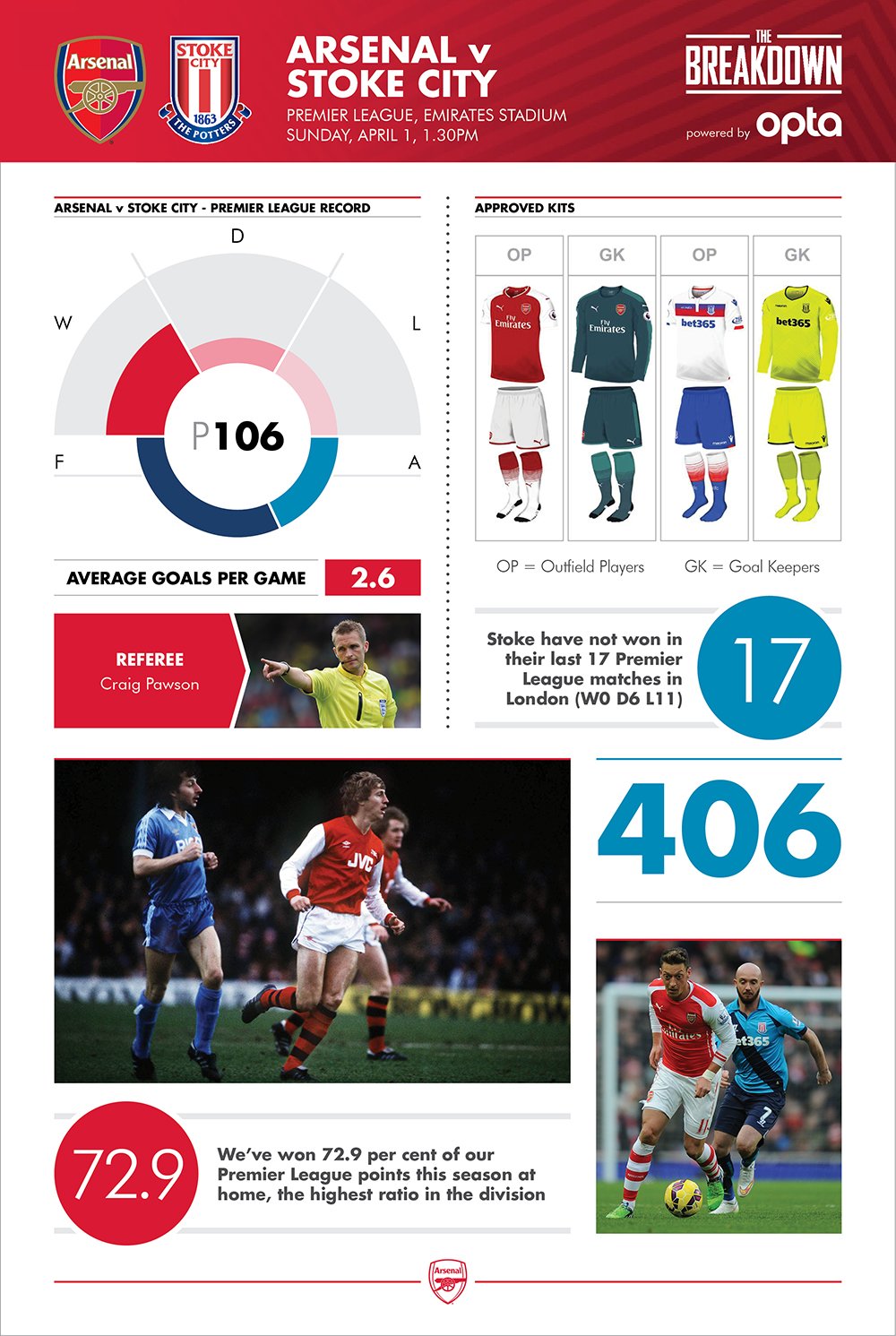 Bould on dealing with physical and mental fatigue in the final stretch...

"I don’t think there’s any fatigue. Fatigue is when you’ve not got anything to strive for. We’ve still got an awful lot to do and I think there’s a bit of excitement actually. Training has been really lively this week with the 10 or so boys who have been here. I don’t think they’re just looking towards the end of the season for a holiday."

“The key dangerman is Xherdan Shaqiri, the only attacker guaranteed of a start. He plays on the right flank and enjoys drifting inside into pockets of space between the lines. While he’s predominantly left-footed, it’s notable that he’s scored three of Stoke’s last four goals, one apiece with his left foot, his right foot and his head. Two have been similar: measured, precisely curled shots into the bottom corner from 25 yards out, and Arsenal must be hugely wary of allowing him space between the lines."

Bould on the importance of going one step at a time…

“Absolutely. The worst thing in the world, if you’ve got to win a football game, is to get beaten in the one before. It’s just a fact that confidence drops. It’s a big game for us against Stoke. We need the three points, a bit of confidence, see if we can improve our form with a view to the Europa League. Really, though, Sunday’s the focus."