The hope: that we can translate our Wembley form against the Blues to a Premier League encounter on their patch. A defeat would vindicate those who responded to last weekend’s win with the lament that “it’s only Bournemouth”. A win… well, that would turn heads and change the perception of our title credentials.

You’re in the right place for a comprehensive pre-match briefing - we’ve got classic goals against Chelsea, team news, an exclusive chat with Arsene Wenger, match facts, graphics and a chance to test your knowledge. 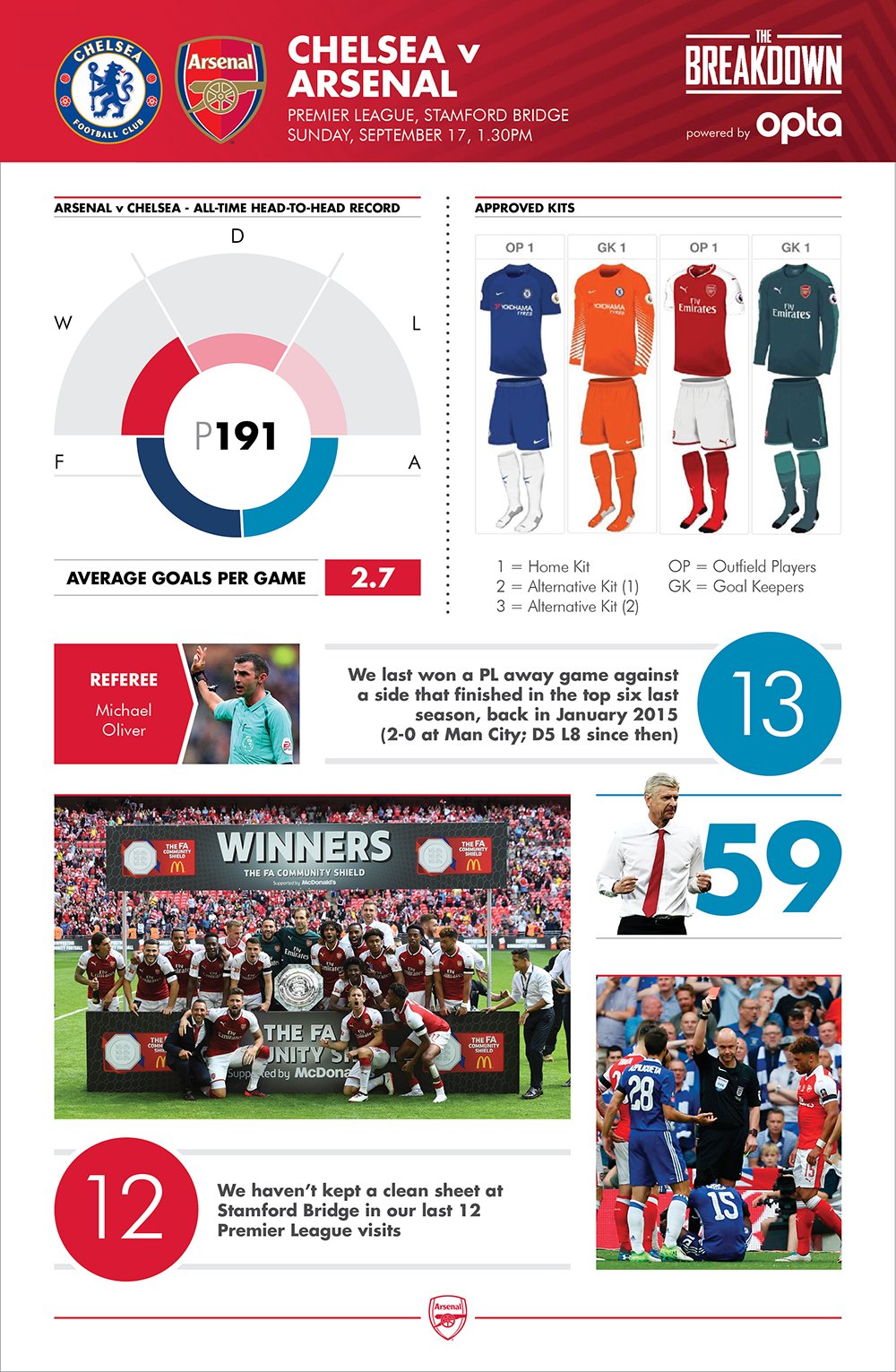 Great response from everyone after a difficult start in the @EuropaLeague! On to Sunday now. #COYG https://t.co/khijIW7kfU

Wenger on the central role in a back three being tailor-made for Mustafi: “He’s reading the game well, strong in the challenge, and he likes to talk as well, so that’s an important quality in that part of the pitch. On both sides of him, we have Koscielny and Monreal who are quick, so that looks well-balanced.

Former Gunner Adrian Clarke: “It really is going to be tough. Not so long ago, Chelsea were having a bad start to their season and losing at Burnley. People were asking if Conte had lost it and whether he would lose his job but, since then, he’s done what he does best and that’s coaching. He’s produced tactical gameplans and Chelsea have been superb in the last couple of weeks. I’ve been really really impressed with them and their new signings are upgrades. Chelsea are coming good and honestly, it’s not a great time to be playing them.

“Morata came here as an underrated player because he’s been a sub at Real Madrid and sometimes for Juventus, but he’s a class player. He’s got great movement, is nimble, offers Chelsea something very different, especially down the  sides. If you get the ball into the box for Alvaro Morata, he can score a variety of goals. He can score with his head, he can score with both feet. He’s a guy who we really need to be aware of on the weekend.”

“I felt that we gave them easy goals. I especially remember the second goal that Hazard scored where we were not strong enough in the challenge or in our individual defending. We learned from it and showed that afterwards in the FA Cup and the Community Shield. I just felt that we played at Wembley like we play at home.

"We didn’t wander too much. It’s on neutral ground and we have a long habit there so we feel we can just play our game. That’s what we want to do this time. It will be interesting again because at Stamford Bridge, we have a good challenge. There is a mental challenge there that we want to get right."

📸 Arsenal squad train in the rain at Colney

🎧 Part two of our Dennis Bergkamp podcast out now

Bacary Sagna | In my own words

Everything would have been so different if none of this had happened, so much easier